AHMEDABAD: The Gujarat government has stepped up its efforts to put the public healthcare infrastructure in place after it almost buckled under the pressure of Covid-19 cases over the last few days.

In such testing times, the state education department’s decision to hold Class 10 board exams has raised questions about the risks involved.

More than 12 lakh students are expected to take the Class 10 board exams this year, and despite the Central Board for Secondary Education (CBSE) cancelling exams for these students, the state government has refused to follow suit.

The decision by CBSE to cancel Class10 exams for 2021 and postpone that for Class 12 was taken after Union education minister Ramesh Pokhriyal’s behest after a review of the Covid-19 situation in the country with the Prime Minister Narendra Modi.

“We have time and again made various representations to the Gujarat government to cancel Class X board exams for Gujarat Secondary and Higher Secondary Education Board (GSHSEB) students. Conducting exams in these times is like putting the lives of lakhs of students and their parents at great risk,” said Naresh Shah, president of All Gujarat Vali Mandal.

Some government officials have also raised concerns about the fate of students who are to pursue further studies in diploma or certification courses after Class 10.

“The Centre has said that CBSE Class 10 students will be evaluated based on an ‘objective criterion’. The same can be applied for GSHSEB students as well,” said a government official.

The issue has become more of a matter of ego for some officials in the state government, who have so far insisted and told their seniors that exams should be held and that there was no turning back now, said sources in the government. 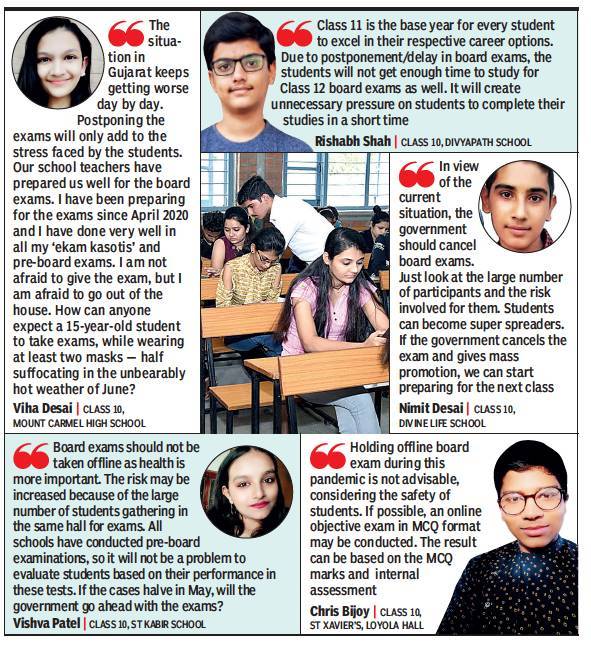