Skip to content
“His nails are blue. His feet are swollen…Teary-eyed, his father broke down looking at his son’s limping gait. Kya gareebo ka bhalaai, adhikaar kay liye ladna itna bada jurm hai? (Is it a crime to fight for the rights of poor?),” he mumbles to himself.

The above is an excerpt from a report in
The Tribune on the condition of Shiv Kumar, president of the Mazdoor Adhikaar Sangathan. Kumar was arrested along with activist Nodeep Kaur for protesting against non-payment of salaries to workers by factory owners. His lawyers allege that he was not produced before a magistrate within 24 hours, as required by law; it was finally done after seven days. They claim that even his medical examination was not carried out for several weeks. The tortured condition described above is a result of him being in custody for almost a month – suggesting that the torture had been prolonged.

The police’s claim against both Kaur and Kumar is that they attacked police personnel who were there responding to a call of distress from factory owners, who claimed that they were being subjected to extortion in the ‘garb of unpaid salaries’.

When I read the police’s version, I was appalled. Both Kaur and Kumar are Dalits. I can tell you from my professional experience that first, poor people are reluctant to approach the police, especially when pitted against the rich. They know that the police will act at the behest of the rich. Dalits are even more reluctant; they know that police stations are staffed by people from castes which are prejudiced against, and hostile to, them. Exceptions are, well, just that – exceptions. The idea of labourers beating up cops and extorting from factory owners is just preposterous.

I then wondered how most of my fellow middle-class members would respond to this story. Would they find it preposterous? The answer is no – and not just because of a bias for fellow members of their class, but also because the poor have been deleted from mainstream conversations. A Unicef report titled State of the World’s Children 2019 said that 38 per cent of Indian children suffer from stunting, and that malnutrition caused 69 per cent of under-five deaths in India. The latest Oxfam inequality report says 6.3 crore people in India are pushed into poverty every year because they are unable to afford healthcare. According to the 2020 Global Hunger Index, India ranks 94th out of 107 countries. The world poverty clock says approximately 8.7 crore people in India are living in extreme poverty. Astonishing numbers, aren’t these? 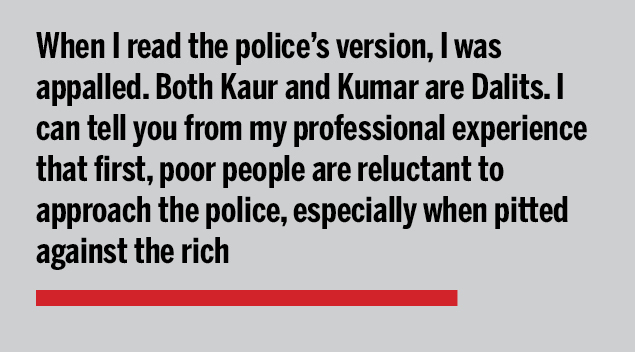 Their lives, their pain and their concerns have simply been blocked from view. This deletion hasn’t happened only in journalistic narratives (again, with exceptions) but in another medium which influences public opinion perhaps more than any other: Cinema. The pervasive inequality and the fact that the status quo was unjust and favoured those who hoarded wealth was often highlighted. Even where inequality was not the central focus of the story, you could at least see poor people, and stories were built around their lives.

Do Bigha Zamin was a movie about a farmer and his family who are pushed into extreme poverty after his land is usurped by an industrialist-money lender who wants to set up a mill on his land. I don’t think there is any dialogue in the movie with the mill owner saying, “So what, I pay taxes”.

In a song from the film Shri 420, titled Dil ka haal sune dilwala, one stanza goes like this: “Gham se abhi azad nahin main, khush hun magar aabaad nahin main, manzil mere paas khadi hai, paanv mein lekin bedi padi hai, taang adaata hai daulat waala”. The film also has a scene where after the poor man (played by Raj Kapoor) returns a lost/dropped wallet to a wealthy man, the wealthy chap takes him to a hotel, points out all the rich patrons there and says, “These are the people who never returned wallets”.

Fast forward to the ’80s and in the film Coolie, actor Amitabh Bachchan plays a union leader of the coolies. He organises a strike which paralyses the functioning of the railway station. In Deewaar, Bachchan’s father, also a union leader, is framed by the factory owner and falsely branded a thief. In Trishul, Bachchan’s mother is a labourer at a construction site, while in Kaala Patthar, Bachchan and actor Shatrughan Sinha play mine workers who are put in harm’s way because the mine owner (played by Prem Chopra) flouts safety regulations. Mazdoor, starring Dilip Kumar, has a song inspired by Faiz Ahmed Faiz’s nazm which says, “Hum mehnatkash is duniya se, Jab apna hissa mangenge, Ek bagh nahi ek khet nahi, Hum saari duniya mangenge… Daulat ki andheri raaton ne, mehnat ka suraj chhupa liya, Daulat ki anderi raaton se, hum apna savera mangenge.” In Angaar, the police-politician-builder nexus goes about destroying lives because it has its eyes on a chawl, while Mere Apne and Ankush deal with unemployment. In the Hindi cinema firmament, virtue always resided with the poor.

Fast forward again, and today you have movies centred around Europe tours; colleges where students wear GAP T-shirts; family dramas about people who live in mansions and have children dropped on their lawn in helicopters; and big, fat expensive weddings with expensive dresses and exotic locations and what not. Gradually, the poor were deleted from the story. Where is the space to portray labour unions in popular culture today?

While journalism owes more responsibility than cinema, it is the deletion of the poor even in this sphere that makes it easier for people to fall for arguments like “they take subsidies, we pay taxes”; “strikes are an inconvenience”; the poor are criminals and so on. Cinema plays a significant role in the formation of national consciousness. It must change track and take a leaf out of the book of Yash Chopra or Khwaja Ahmed Abbas, even if it is reluctant to take the Govind Nihalani road. Cinema can ensure that an event like the arrest of Shiv Kumar makes people respond with empathy and demands for justice. Cinema must realise its power and take control of the narrative, wisely and fairly, instead of cowing before those who believe that they ought to have total control of all institutions, including cinema.

Dushyant is a lawyer and holds a brief for the argumentative Indian
(Disclaimer: The views expressed here are the author’s own)