Skip to content
Telegram is too small and Twitter, too open. Unfettered by constraints of reach and scrutiny, political WhatsApp groups are where Islamophobic discourse is being driven in India. In the first large-scale study of fear speech, going over 2 million messages in more than 5,000 Indian WhatsApp groups, computer scientists from the Indian Institute of Technology (IIT), Kharagpur and Massachusetts Institute of Technology (MIT) have found that one in three posts in these groups incites fear of Muslims.

“We manually curated a dataset of 27,000 posts, out of which about 8,000 posts were fear speech,” the paper, to be presented at the Web Conference 2021, said. And these posts were directed at India’s Muslim community. “It’s a similar tactic used by all these groups. To be overtly Hindu,” lead author Dr Kiran Garimella from the MIT Institute of Data, Systems and Society told TOI. 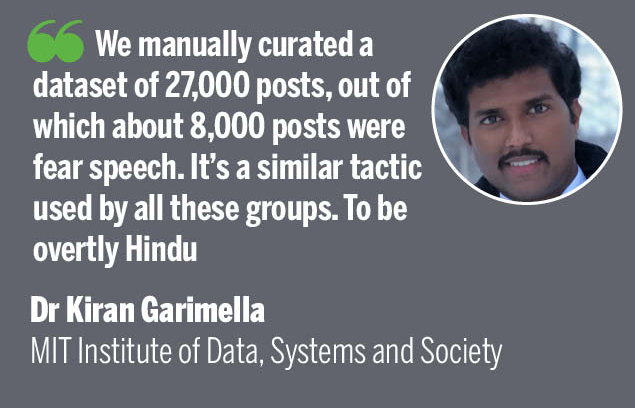 It’s uncharted territory. Because hate is conspicuous — when it is incited, the patterns are easy to spot. Fear is subtle and the ways in which it is invoked, far more insidious. While reams of algorithms can now identify hate speech, there has been little done to zero in on fear speech. For instance, one text in their dataset says, “Mob lynching has started with Muslim neighbourhoods … This creates a feeling among Hindus that when they get a chance, they will also surround them, beat them and kill them.” It’s a threat, but one veiled in language that would not immediately be labelled as toxic, even by algorithms.

For the study, seven annotators went over all the messages, pulled between August 2018 and August 2019, and labelled each as “fear speech” or “normal”. They found that fear speech spreads fast (about 8 reshares for each message), is sent to more groups (about 7, compared to 5 for non-fear speech groups) and keeps circulating for much longer than non-fear speech (about 25 days, as opposed to the 18 days a non-fear message is active).

Then, they identified eight recurring subjects — the most popular were conspiracy theories that imply “Muslim exploitation of Dalits” and that “Kerala riots” were instigated by Muslims. “Islamisation of Bengal” is another popular subject, as are “UPSC jihad”, “women mistreated in Islam” and “Muslim population.” 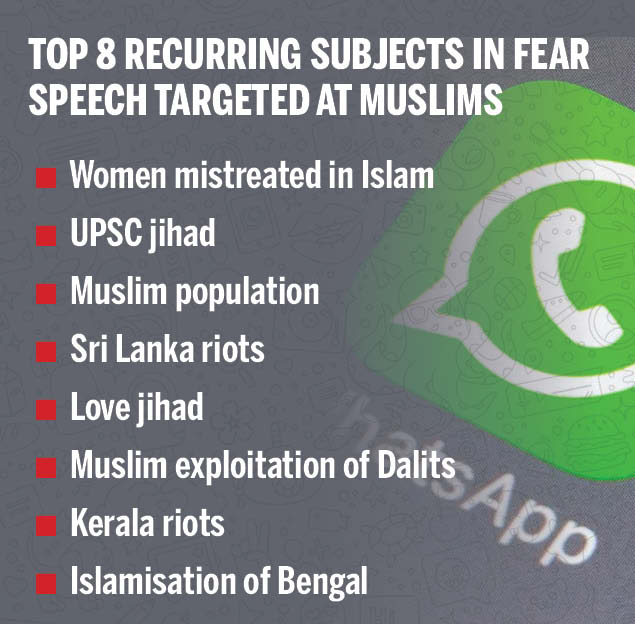 When TOI went over the dataset, there was a wide range of misinformation meant to stoke fear among Hindus. Wayanad, where Rahul Gandhi was contesting, was vilified right before the 2019 Lok Sabha elections as a place where “decrees are given to kill non-Muslims every Friday.” Muslim doctors were accused of “medical jihad,” a conspiracy theory that they kill Hindus with the fake treatment they offer, with a reference to Gorakhpur’s Dr Kafeel Khan. And “love jihad”, the messages said, was actually meant to feed a black-market organ trade — “Middle class Bharatiya girls do not smoke or drink and maintain their bodies …
Ek ladki ki kimat
Rs 5 crore hai (one girl costs Rs 5 crore).”

Emojis, they found, were used a lot. At least one emoji was present in 52% of the fear speech messages (compared to 44% for the whole dataset). And these emojis have taken on deeply entrenched meanings. Those of the saffron flag, trident, bow and arrow, conch shells and the om symbol were used to represent Hindutva, while dehumanising emojis of demon, devil smileys, pig face and pig were used to represent Muslims.

As on most such platforms, a few people do all the talking. In these groups, they found, only 10% users post around 90% of the messages and 8% of these fear speech users are admins of the groups. “One of the key points is that it seems to be a concerted effort. Now, it’s not even a secret or a great finding. If messages in these politically oriented groups talk about Muslims as a fear narrative, someone is deciding that you need to put them out,” said Garimella. “And these messages are not short, like on Twitter.” The study found the average fear speech message was 89 words long — “not something you just think of and tweet.”

And there is a fake sense of rigour. “In 1378, a part of India was separated, became an Islamic nation. Name is Iran. In 1761, a part was separated from India, became an Islamic nation. Name is Afghanistan … and now Uttar Pradesh, Assam and Kerala are on the verge of becoming an Islamic state!” says one message with fake information. “With made-up facts, fake numbers, they create a feeling of scientific rigour … Someone really took the time to think of this and set it in a narrative,” said Garimella. “But this is all well-known. They are doing it in the open. It is no longer surprising.” 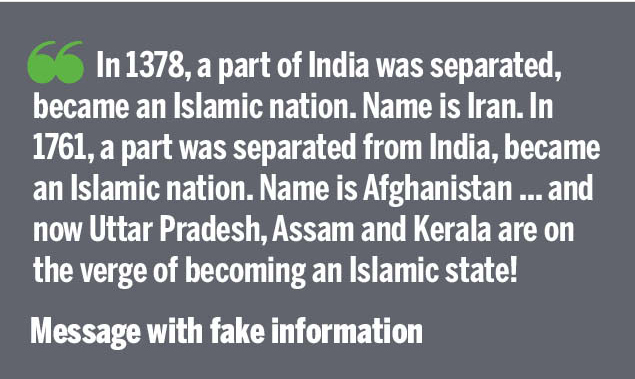 The position WhatsApp occupies in a country like India — with 452 million active users — makes this all the more significant. “Our research study started with thinking about moderation. One of the reasons WhatsApp is important is because there is no moderation,” Garimella added. “I am not really interested in studying Twitter or Telegram. They are really fringe. Telegram has about 25% penetration in India. But WhatsApp has 80% of internet users. That scale makes a difference.”